Weredragons, men call them. Monsters. Cursed ones. People who can turn into beastly reptiles.

In an ancient world just rising from darkness, they are everywhere. Some wander the plains with clans of mammoth hunters. Others are born in riverside huts. Some live across the ocean where seafaring tribes are discovering the secrets of bronze and writing in clay. Everywhere their curse is the same--people who can grow wings, breathe fire, and take flight as dragons.

And everywhere, they are hunted. They hide in forests and caves, dispersed. Many are alone, unaware that others exist. They are shunned, afraid, dying . . . until a group of these lost souls binds together and stands tall.

A blacksmith in a world of stone tools. A mammoth hunter exiled from her tribe. A traveling juggler and a wandering warrior. An elderly druid and an outcast prince. They are weredragons. They are cursed and hunted. Together they will forge a new tribe, a home for their kind. A dawn of dragon rises. The nation of Requiem is born.

In 2011, Blood of Requiem introduced readers to mythical Requiem, a land where people can become dragons. The book and its sequels went on to sell over 350,000 copies, captivating readers around the world. Requiem's Song returns to Requiem with a new tale--for both new readers and old fans--of wings, claws, and dragonfire.

Requiem: Dragonlore
Book 1: A Dawn of Dragonfire
Book 2: A Day of Dragon Blood
Book 3: A Night of Dragon Wings

Requiem: The Dragon War
Book 1: A Legacy of Light
Book 2: A Birthright of Blood
Book 3: A Memory of Fire 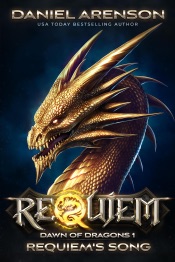