Rex Fortescue, king of a financial empire, was sipping tea in his ‘counting house’ when he suffered an agonising and sudden death. On later inspection, the pockets of the deceased were found to contain traces of cereals.

Yet, it was the incident in the parlour which confirmed Jane Marple’s suspicion that here she was looking at a case of crime by rhyme…

Agatha Christie was born in Torquay in 1890 and became, quite simply, the best-selling novelist in history. Her first novel, The Mysterious Affair at Styles, written towards the end of the First World War, introduced us to Hercule Poirot, who was to become the most popular detective in crime fiction since Sherlock Holmes. She is known throughout the world as the Queen of Crime. Her books have sold over a billion copies in the English language and another billion in over 100 foreign languages. She is the author of 80 crime novels and short story collections, 19 plays, and six novels under the name of Mary Westmacott. 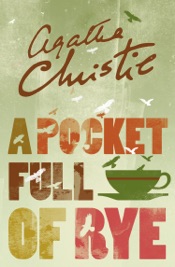